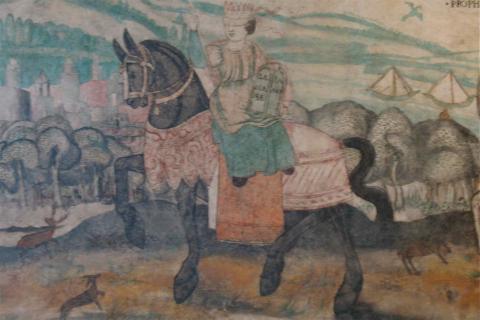 Italian poet of the XIV century, the founder of early humanism. Considering mentor writer-monk Barlaam of Calabria, he played a major role in the Italian proto-Renaissance through and became a cult poet of the middle Ages.

Francesco Petrarca was born at Arezzo, 20 July 1304. His father was Pietro di ser, Parenzo, a Florentine lawyer, who had been expelled from Florence at the same time as Dante, for support of the party "white". Parenzo, had the nickname "Petracco" - probably because of this subsequently formed the pseudonym of the poet. The family of Parenzo moved from one Tuscan city to another, and when Francesco was nine years old, settled in the French Avignon. Subsequently, the mother of Petrarch moved to the nearby town of Carpentras.

In Avignon, the boy began to attend school, learned Latin and became interested in works of Roman literature. In 1319 Francesco graduated from high school, then my father told me to study law. Although the law was not close to Francesco, the young man had done the father's will, enrolling in Montpellier, and soon – and University of Bologna. In 1326 Petrarch's father died, and the young man finally realized that the classical writers for a much more interesting legislative acts.

The only legacy that got Francesco after his father's death, was the manuscript of the works of Virgil. Partly because of the difficult financial situation, partly due to the desire for spiritual enlightenment, after graduation, Petrarch decided to accept the priesthood. Italian settled at the papal court in Avignon and became friendly with the representatives of the family of Colonna (Giacomo Colonna - mate since University studies).

In 1327, Francesco first saw Laura de New, unrequited love which prompted him to write the poems that are considered the pinnacle of craftsmanship in the field of Italian sonnets.

The most popular Petrarch brought poetic works written in the Italian language. The overwhelming part is devoted to the Laura de New (although her full name still remains a mystery, and Laura de New – it is only the most suitable candidate for the role of the Muse of Petrarch). The poet himself informs about his beloved only that her name is Laura, which was first seen on 6 April 1327 in the Church of Santa Chiara, and that on 6 April 1348, the year this woman died. After Laura's death, Francesco sang this love for the past ten years.

A collection of canzone and sonnets dedicated to Laura, is called "II Canzoniere" or "Rime Sparse". The collection consists of two parts. Although most of the works included in it, describes the love of Petrarch for Laura, "Canzoniere" was a place and for several other verses of contents: religious and political. Before the beginning of the seventeenth century this collection has re-released two hundred times. Reviews of sonnets contained in the "Canzoniere", were written by poets and scholars from different countries, acknowledging the undeniable value of the works of Francesco for the development of Italian and world literature.

It is noteworthy that Petrarch himself did not take seriously to his Italian poetic works. Although poetry provided the success, and initially Petrarch wrote only for themselves and were perceived as trifles and trifle, to help him ease the soul. But their sincerity and spontaneity relished the world community, and as a result, these works had an impact both on contemporaries of Petrarch and writers of subsequent generations.